This game started with the particle effect for the blood (or ketchup?) splatter. Trying out different velocities and angles of impact was kind of fun (Did someone say Dexter - blood splatter analyst?). I decided to turn it into a game.

I decided to go for a one-button endless runner. I created 32 different level segments, which could be randomly selected, based on a seed. For the single player, the seed was fixed, and for the multiplayer challenge, a new seed was selected every day. The 32 level segments were enough to get a new experience every day, and it really felt like a completely new level each time.

The game was selected as a Featured Game in (at least) Mexico, (they probably like chopping tomatoes there...) which led to significantly improved download numbers.

The game was only released on Windows Phone, and is not available for download any more. 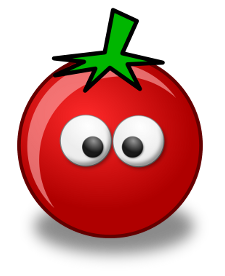